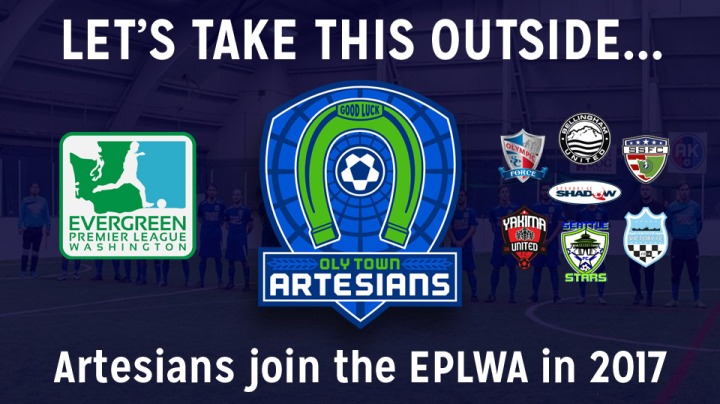 BELLINGHAM, Wash. – The Evergreen Premier League is excited to announce that Oly Town Football Club of Olympia, Washington has been accepted as the 8th club into the statewide elite adult amateur soccer league. Oly Town FC, nicknamed the Artesians, will begin play in the EPLWA starting in the 2017 season which kicks off in early May.

The Artesians will bring the highest level of non-collegiate outdoor soccer that Olympia has seen. The Evergreen Premier League is currently at the 4th Division level in all of US Soccer. Oly Town FC is already competing indoors in the Western Indoor Soccer League (WISL), a league they helped found back in 2014.

Oly Town FC owner Tim Smith looks forward to taking what his club has established indoors to the outdoor soccer realm. “We’re excited to showcase local talent. This is an opportunity to represent our community and we could not be more proud of where we come from. Olympia’s soccer community has demonstrated its ability to come together to accomplish great things. That’s what we’ve done in the WISL, and that’s what we expect to do as members of the EPLWA.”

Artesians General Manager Brandon Sparks anticipates his club will help raise the game in the state capital. “With strong youth organizations and three men’s college soccer programs in the area, there is a lot of talent in Thurston County that are eager to continue playing outdoor soccer at a high level and represent Olympia around the state. We are excited to provide that opportunity to our players and the community and continue to build a strong soccer culture in Olympia.”

Sparks is looking forward to planning eventful match days for Oly Town fans. “I’m most excited for the opportunity to have a lot of fun bringing these games to people in the Olympia area. We believe in a good time, making a lot of noise, supporting our team and enjoying ourselves and are excited to share that with soccer fans in town throughout the spring and summer.”

Evergreen Premier League President Peter Ostrovsky exudes excitement on behalf of the league and its seven other clubs. “How could we not have a team representing the State’s Capital City in our league?,” he says rhetorically. “Historically, geographically and soccer-wise, Oly Town brings our league a lot of diversity and depth by book-ending and securing the very south of Puget Sound for us. This will be a great opportunity for high level amateur players in and near Olympia. The addition of the Artesians into our league will also be a wonderful opportunity for Olympia soccer fans to support their very own local club playing at the highest state-wide amateur level, recognized as an Elite Amateur League by the US Adult Soccer Association.”

The Artesians will continue to compete in the WISL, where they are currently in the early stages of an unbeaten campaign. The indoor season runs through the end of February with home matches played at the Evergreen Pavilion on the campus of The Evergreen State College. The club will at the same time begin making preparations for their outdoor debut. The Artesians have a strong online presence via their official club site at OlyTownFC.com, as well as social media pages Twitter.com/OlyTownFC and Facebook.com/OlyTownFC.

About the Evergreen Premier League

The Evergreen Premier League of Washington (EPLWA) is an elite adult men’s amateur soccer league for college and post-college age players to feature their skills on hometown clubs throughout the state of Washington. The league’s mission is to cultivate “football club” culture while providing opportunities for coaches, owners, supporters, players and towns to enjoy the sport and all of the community-building it can bring. The EPLWA is a USASA Premier League awarded 4th Division USA status. The EPLWA is affiliated with the Washington State Adult Soccer Association, US Adult Soccer, US Soccer, the Washington State Referee Committee and FIFA.