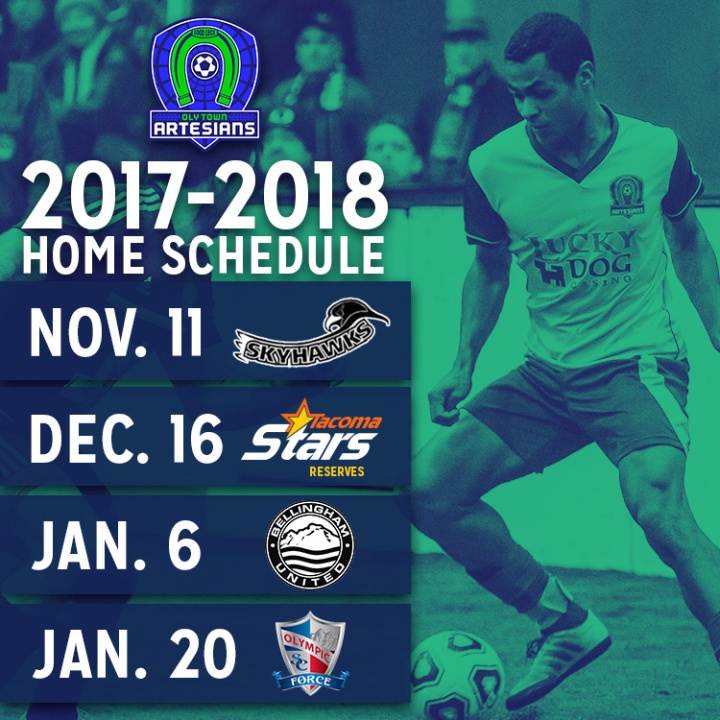 OLYMPIA, Wash. – The Oly Town Artesians will open their 2017-2018 indoor soccer season with a home match against the Snohomish Skyhawks on Saturday, November 11th, the Western Indoor Soccer League announced today. The game is the first in an eight game season that runs from mid-November to early February and features four home games and four road games.

The Artesians will return to The Pavilion on the campus of The Evergreen State College for four games, starting with their season opener against the Skyhawks on November 11th. The Tacoma Stars Reserves will make a trip to campus on Saturday, December 16th. Defending league champion Bellingham United makes their Olympia trip on January 6th and the home slate wraps up on Saturday, January 20th against the Olympic Force.

Oly Town will hit the road after the Thanksgiving break to face the Skyhawks in Snohomish on December 2nd before facing the Force in Bremerton on December 9th. They hit Tacoma to take on the Stars Reserves on January 13th and wrap up the regular season in Bellingham on February 3rd. With five teams returning to the WISL, the Artesians will have bye weeks on November 18th and January 27th.

The Artesians enter their fourth indoor soccer season and are coming off their best year, finishing in third place with four wins, five losses, and one draw. Evergreen alum Willie Spurr scored 14 goals and chipped in with 11 assists to lead the club in both categories.

Tryouts for the 2017-2018 Oly Town club are scheduled for Saturday, October 14th at 3:00 PM and Sunday, October 15th at 1:00 PM at The Pavilion. Players are encouraged to pre-register by visiting www.olytownfc.com/tryouts. The cost to tryout is $25.