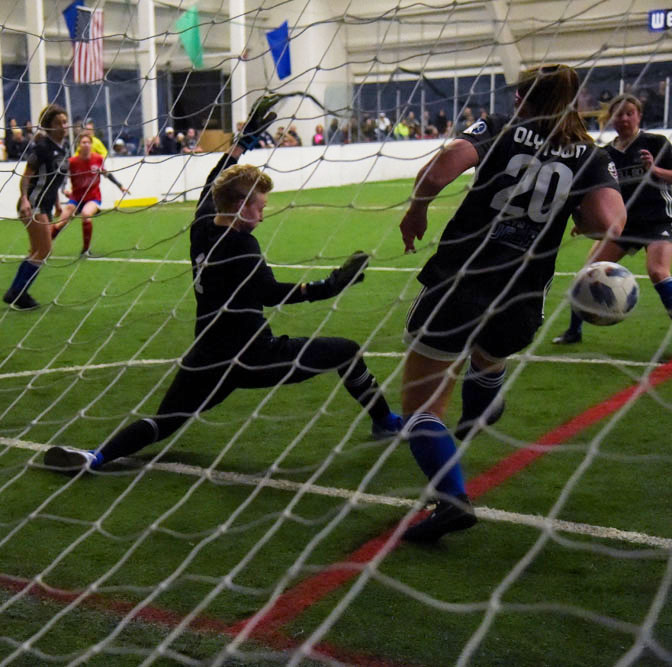 OLYMPIA, Wash. – Oly Town Artesians goalkeeper Bradley Hanson has been named Defensive Player of the Week by the Western Indoor Soccer League for his performance against Bellingham United in the team’s season finale on Saturday night.

Hanson tallied 32 saves and was instrumental in keeping a depleted Artesians team close to the high powered and first place Bellingham squad until late in the contest. Hanson, a Shelton native and crewman for Mason County PUD 3, made the start with regular starter JJ Olson pressed into field duty. It was his second start of the season.

His performance in a 10-5 loss was so impressive that the Bellingham United staff were the first to nominate him for the award. Bellingham striker Richard Henderson won the Offensive Player of the Week award with three goals and five assists against Hanson and Oly Town.

It is the second Defensive Player of the Week award for Oly this season. JJ Olson was given the award for his performance in an upset win over the Tacoma Stars Reserves on December 16th. It is the fourth time an Artesian has won the award. Goalkeeper Evan Munn won the award twice during the 2015-2016 season.

With the WISL season coming to an end for the Artesians, focus now turns to the outdoor Evergreen Premier League season. Multiple announcements will come soon with tryouts set for late March or early April, preseason games beginning in April, and the regular season will begin in early May. Oly Town is set to play in the newly formed Coastal Division along with the Vancouver Victory and the defending league champion Seattle Stars.