The Olympia soccer community gathered together on Saturday afternoon to pay tribute to Austin Kelley in the annual AK game. The Artesians triumphed over the Oly Legends and a great time was had by everybody involved. After the game, Josh Dube was given the Austin Kelley Award and Matt Herrera was give the new Owners Award and the Artesians made a contribution to the Kelley family in Austin’s memory.

Thanks to Sonja Purtteman, who delivered this photo gallery of the festivities.

END_OF_DOCUMENT_TOKEN_TO_BE_REPLACED

The Oly Town Artesians scored five times in the fourth quarter on Saturday night including three straight goals scored by Shannon McMahon and the goalkeeper Emily Sorenson and the Artesians defense held off the Oly-Pen Force to win their first women’s Western Indoor Soccer League game, 7-4. It was a great game played in front of a loud and excited crowd and Sonja Purtteman was there and delivered this photo gallery.

If you like all this action, we will be back in action at home on Saturday, March 21st when we face Tacoma Narrows. First kick at The Pavilion is set for 7:00 PM.

END_OF_DOCUMENT_TOKEN_TO_BE_REPLACED

OLYMPIA, Wash. – Shannon McMahon scored three goals in the fourth quarter and Leah Magee added two earlier goals to lead the Oly Town Artesians to their first women’s Western Indoor Soccer League win, 7-4 over the Oly-Pen Force, in front of a raucous crowd at The Pavilion on Saturday night. Earlier in the evening, the Artesians men knocked off the Oly Legends 13-2 in the annual Austin Kelley Tribute Game that started a fantastic night for the Olympia soccer community.

Leah Magee made history on Saturday night when she scored the first goal in women’s WISL history and the first goal for the Artesians women with 2:14 left in the first quarter to give the Artesians a 1-0 lead. Oly-Pen answered back when Emily Wilkins scored with 9:18 left in the second quarter to tie it up, 1-1. But Oly Town goalkeeper Emily Sorenson and Oly-Pen keeper Akilah Austin kept the game all tied up at one at the break.

The Force struck first in the second half when Jules Bushaw scored a pass by Jess Haga moments after the Artesians were hit with a blue card. The power play goal gave the Force a 2-1 lead midway through the second quarter. Magee struck for a second time with 1:25 left in the third to tie the game up 2-2 and the two teams went into the fourth quarter all knotted up.

On the first kick of the fourth quarter, Maria Reyes touched the restart to Shannon McMahon, who fired from midfield. The ball took a slight deflection off of an Oly-Pen defender and found the back of the net to give the Artesians a 3-2 lead, one that they would not relinquish. Just 15 seconds later, McMahon took the ball away from a Force player at midfield, took a couple dribbles in and then fired into the top right corner to give the Artesians a 4-2 lead just 21 seconds into the quarter.

Oly-Pen scored a shorthanded goal during an Artesians power play midway through the fourth quarter to make it 4-3, but McMahon struck again, her third of the quarter to give her the first hat trick in team and league history, to make it 5-3. Kate Gose and Niki Covert added goals down the stretch and the Artesians took home their first women’s win, 7-4. 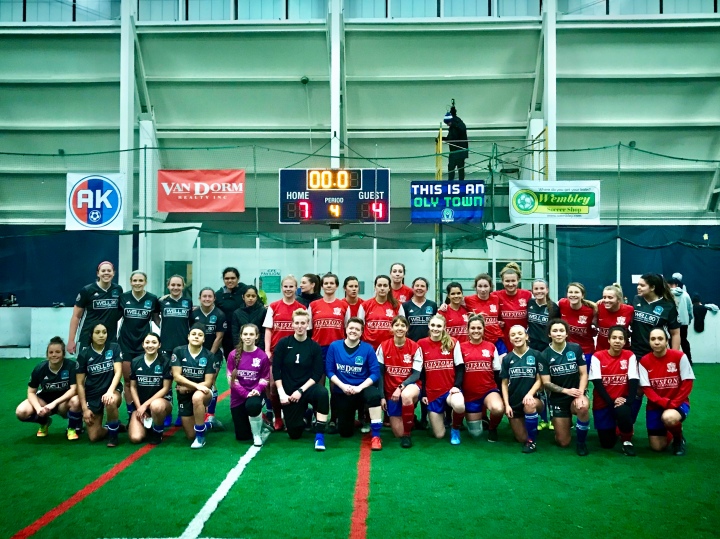 Up next for the Artesians (1-0-0, 3 points) is a trip to Snohomish to take on the Skyhawks, who fell in their first game 8-1 to Tacoma Narrows. First kick at the Snohomish Soccer Dome is set for 7:00 PM. 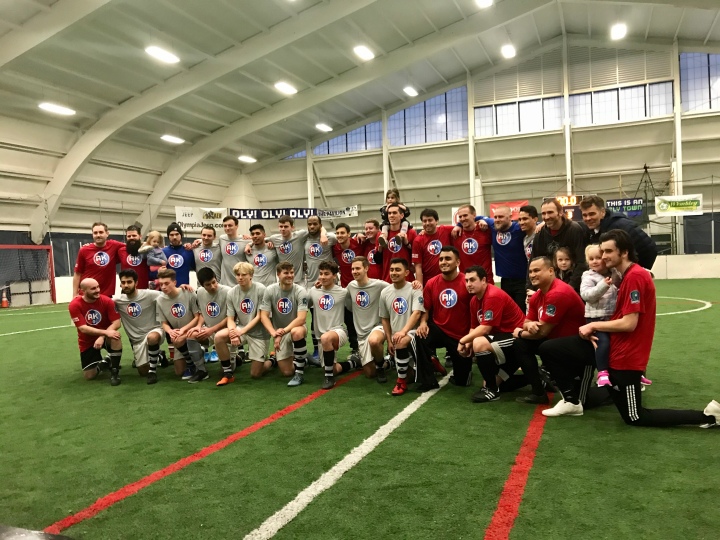 Before the women’s game, the Artesians men and the Oly Legends, an all-star team of local soccer players including many former Artesians and professional players, paid tribute to Austin Kelley in the annual AK Game. Eli Boatright, Manny Nicasio and Christian Segovia each scored two goals in a 13-2 Artesians win. Steven Sharp scored in the second quarter for the Legends and Josh Phillips picked up a goal in the fourth quarter for the Legends.

After the game, the Artesians ownership group presented a portion of the proceeds to the Kelley Family and named the Josh Dube the recipient of the annual Austin Kelley Award for his commitment to the club and selfless play on the field. Matt Herrera was also given the first Owners Award for his contributions to the Artesians.