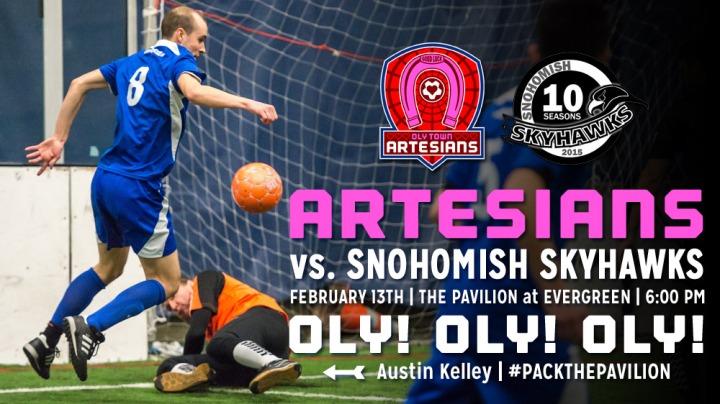 OLYMPIA, Wash. – The Oly Town Artesians close out the 2015-2016 season when they host the Snohomish Skyhawks on Saturday, February 13th at The Pavilion at The Evergreen State College. The Artesians will be looking to avenge a 4-2 loss to the Skyhawks on December 12th and could play the spoiler role in Snohomish’s playoff push.

Tacoma Community College product Tanner Allison joined the Artesians (1-7-1) five games into the season and has led the way on offense ever since. With his hat trick last Saturday against the Vancouver Victory, he took over the team lead in goals scored with seven and has scored five of the last eight goals for the Artesians.

Defender Tom Kemennu racked up two assists in the game against the Victory and head coach Matt Stalnik scored his first goal of the season in his return from a major knee injury suffered over a year ago. Captain Jake Sanford scored his fourth goal of the season and sits tied for third on the team in goals scored.

The Skyhawks (3-5-0) have lost four straight games (and a fifth game on the field, but they were awarded the win after Vancouver was forced to forfeit the game after using an ineligible player) but are still technically in the playoff race. They need to beat the Artesians on Saturday to stay alive and then get some help along the way. The Skyhawks are led by Hector Valdovinos’ eight goals but are the lowest scoring team in the WISL this season.

The two teams met on December 12th in Snohomish in a low scoring game that the Skyhawks won 4-2. Alex Taylor scored twice for the Skyhawks while Greg Wolfe and JC Henson notched the two Artesians goals.

First kick on Saturday is scheduled for 6:00 PM and doors open at 5:00. Tickets are $8 for adults, $5 for kids 5-12 years old and kids under five are free. All tickets can be purchased at the door.